Top reasons to pick us

Save Money
Cheaper than airline excess baggage fees, as found by consumer watchdog Which?
30kg as standard
Take what you want, not just what you can with our generous weight allowances.
Skip check-in
Don't just jump the queues, skip them altogether when you use Send My Bag.
Skip collection
No need to wait at the luggage carousel, we deliver straight to your doorstep.
Travel light
Our door to door courier service allows you to travel light, like the VIP you are.

2019 United Airlines Baggage Allowance for Carry On and Checked Baggage 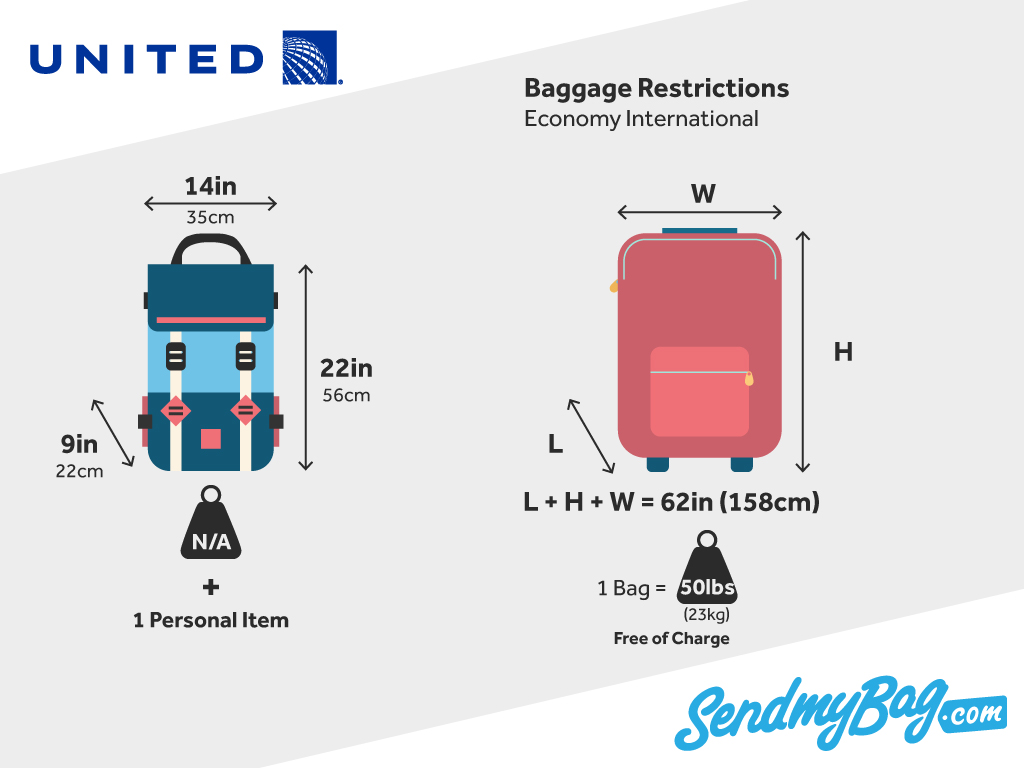 If you need to take more on your journey than United's baggage allowance permits, or if you would rather do without the hassle of travelling with luggage, why not ship your luggage using our door-to-door luggage service? We pick your luggage up before you leave, then deliver it to your destination, whether that's your new home abroad or a hotel reception. Read more about sending unaccompanied baggage.

The United Airlines baggage allowance for passengers travelling on a Basic Economy fare is different, however. Basic Economy passengers are not permitted to carry on board a larger cabin bag. Basic Economy Fare passengers may only bring on board one personal item with maximum dimensions of 9 x 10 x 17 inches (22 x 25 x 43 cm).

If you are a Basic Economy passenger and bring a full-sized cabin bag to the gate, you will be required to check it in and pay a $25 handling fee.

Items such as an umbrella, child restraint or nappy/diaper bag are also permitted by the United Airlines baggage allowance.

On United Express flights, customers may need to check in larger cabin items at the gate, due to the smaller aircraft being used on these routes.

United Airlines Carry On for Infants

Adults travelling with infants on their lap may bring a diaper bag, breast pump and child seat, in addition to their standard carry-on allowance.

The United Airlines baggage allowance rules state that musical instruments may be carried on board, along with a personal item, and stowed in the overhead locker or under the seat in front.

If travelling on a Basic Economy fare, however, the instrument can be carried instead of a personal item. If you bring an instrument to the gate that cannot be stored in the cabin, it must be checked and a $25 handling fee must be paid.

United Airlines Carry On and Bringing Pets on Board

As part of United Airlines' carry on allowance, domesticated cats, dogs, rabbits and birds (except cockatoos) are permitted to travel in the cabin on most flights within the US. A pet must be transported in a carrier and can be carried in addition to a carry-on bag. The cost is $125, one way. The maximum dimensions for hard-sided kennels are 17.5 x 12 x 7.5 inches (44 x 30 x 19 cm). The maximum dimensions for soft-sided kennels are 18 x 11 x 11 inches (46 x 28 x 28 cm). With the exception of birds, there may only be one pet per kennel, and the animal must be able to stand up and turn around comfortably.

United Carry On and Prohibited Items

Certain items cannot be carried on board the aircraft as they are considered dangerous. These include:

United Airlines' checked baggage allowance permits Economy and Basic Economy fare passengers to check into the hold bags that measure no more than 62 inches (158 cm) in total and that weigh no more than 50 lbs (23 kg).

Higher fares, such as Business and First, plus active US military personnel, may carry bags up to 70 lbs (32 kg) in weight.

US military personnel on orders are allowed to check luggage measuring up to 115 inches (292 cm) in total.

The amount United charges for checked baggage varies according to route.

On a US domestic flight with an economy ticket, a passenger would expect to pay

On an economy fare to Europe, the first bag is free of charge and the second costs $100.

A number of routes, such as US - Dubai / Rio de Janeiro, permit 2 checked bags free of charge.

There are increased United luggage allowances with higher fare types.

Children, including infants on a fare that is 10% of an adult fare, are granted the standard United checked baggage allowance, plus an allowance of one pushchair or car seat.

If a bag exceeds the United Airlines baggage allowance, fees will be charged. These vary according to destination and the type of fare travelled on.

For example, on an economy fare between Europe and the US, a third, and any further bag, costs $200.

On an economy fare from Newark to Chicago, a third, and any additional bag, costs $150.

According to the rules regarding United’s baggage allowances, all three penalties could potentially apply to one bag.

Please note that there are both temporary and permanent excess baggage embargoes on certain routes, which restrict baggage allowances with United.

Items that the United Airlines baggage allowance rules consider to be exceptional items, such as sports equipment, can be checked into the hold, often as standard checked baggage.There are some exceptions, however.

Musical instruments can be checked into the hold, provided they are properly packaged.

Pets can be transported in the hold. Costs for this vary greatly. For example, for travel from NY to LA, it costs $348.50 to transport an animal weighing 22  lbs in a 10-lb crate.

Announces plans to trial pre-flight COVID-19 testing from November to passengers travelling to London in efforts to curb concerns about the virus and get around travel restrictions.

Along with other Airlines for America (A4A) members, United Airlines reveal they are to strengthen their mandatory mask rules in order to further prevent the spread of COVID-19 and protect passengers and crew.

Although figures are preliminary, it is estimated the Chicago-based United have lost $2.1 billion in the first quarter of 2020. This is 17% lower compared to the same period in 2019 and the airlines biggest loss in twelve years.

The US government agree on a $25bn bailout package for the struggling airline industry in the wake of COVID-19.

Disclaimer - Information gathered from these webpages on 23/04/2019:

Baggage at a glance

Economy fare: one cabin bag, plus one personal item

may be charged, depending on route and fare type

Top reasons to pick us

Save Money
Cheaper than airline excess baggage fees, as found by consumer watchdog Which?
30kg as standard
Take what you want, not just what you can with our generous weight allowances.
Skip check-in
Don't just jump the queues, skip them altogether when you use Send My Bag.
Skip collection
No need to wait at the luggage carousel, we deliver straight to your doorstep.
Travel light
Our door to door courier service allows you to travel light, like the VIP you are.
Looking for United sized hand luggage?

It can be difficult to know if your cabin baggage meets an airline's size requirements, for your convenience here is a selection of luggage which retailers state are approved by the airlines. We recommend checking with the retailer that the bag is suitable for your airline and other requirements.

*Send My Bag does not endorse any products sold on external websites.